There Will be spoilers in this article, as it would be difficult to discuss the film without acknowledging them. You have been warned.

On Sunday during the Super Bowl a trailer was revealed for the newest film in the evolving Cloverfield series titled “The Cloverfield Paradox”. An intriguing and quick snippet marketed the latest installment as a sci-fi horror with mysterious ongoings, but more importantly- the film would be available immediately after the Super Bowl on Netflix. So, I thought I’d give it a shot, I adored the initial Cloverfield film and the secret sequel in “10 Cloverfield Lane” was a nice little surprise when it was released- why not give this flick a watch? Written by Oren Uziel and directed by Julius Onah, “The Cloverfield Paradox” is a science-fiction thriller set on an international space station in a future timeline where the Earth is embroiled in a dire energy crisis that threatens to throw the nations of the world into world war three.

First let’s discuss the best part of the film, the cast. The crew of the Shepard consists of seven experts from different fields of study and different countries of origin. They include our lead, Hamilton (Gugu Mbatha-Raw) from Britain, Kiel (David Oyelowo) the commander of the Shepard and an American, Mundy (Chris O’Dowd) an Irishman and the comedic relief, Monk (John Ortiz) the doctor aboard the ship and resident representative of the faithful alongside Oyelowo’s American Kiel. Next up are Schmidt (Daniel Brühl) the German electrician and Tam (Ziyi Zhang) the Chinese scientist who together are the only relationship on the Shepard while, curiously, Tam is the only specialist that speaks her country’s language. The last member of the Shepard is Volkov (Aksel Hennie) the Russian navigator that ironically instigates the others into fisticuffs and arguments.

The movie opens during a blackout in Britain before the Shepard takes flight. We’re introduced to Hamilton and Michael (Roger Davies) a doctor in London, and her husband. They discuss her options between staying on Earth and helping as best as practically possible while getting over their shared grief, or to secure her position on the Shepard and use her skills to the greater betterment of humanity. Ultimately, we know the choice that she will make, which leads me to one of the issues I have with the film. While I did enjoy my time with this film, and I’d be doing a disservice to myself and this review by saying otherwise, the movie does telegraph a lot of the the film’s ideas in play a smidge too much for me, which clashes a bit with the mystery box style so beloved by the properties that J.J. Abrams has had a hand in producing. To it’s credit though there are some excellent moments and scenes that fully encapsulate the “What the hell just happened and how do we deal with this?” aesthetic, such as the earth disappearing from view after the particle accelerator is turned on, and the mysterious woman that the crew finds in the walls of the ship. 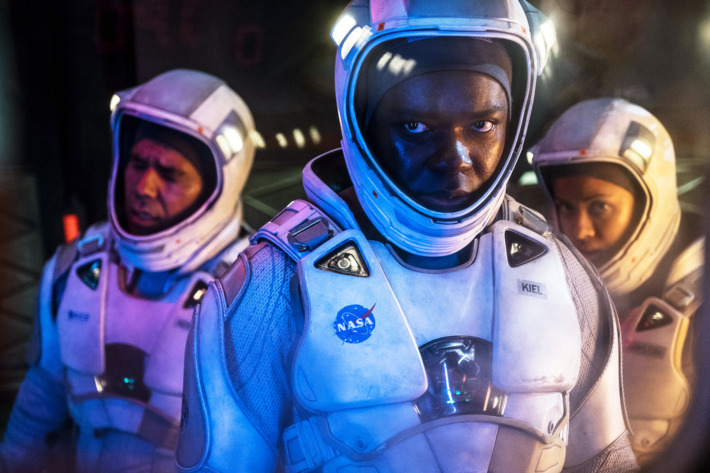 Eventually the crew discovers the Earth on the opposite side of the sun. They can receive signals but they cannot transmit any, thus during their celebration they discover that the Earth is in the midst of a forty month war across Europe as the energy crisis has erupted into a full blown world war. They also see a newsflash of their ship, now called The Cloverfield in pieces floating in the ocean. They quickly realize that they aren’t in some future or past, but rather they are in another dimension. One where the Particle accelerator blew up the space station instead of transporting it across dimensions.

So, here I’d like to take the time to discuss the confusing response to the film’s release and what I enjoyed about the film overall before getting into my own theory on what happened across all of these films. I was quite taken aback by the anger and vitriol thrown at this movie from all corners of the internet after it’s release. Some called it a comedy, while others trash the film as somehow tricking moviegoers into watching a movie, and even a few seemed to outright hate this film and conveyed feelings of betrayal. I’m not sure how so many people came to despise this movie when nobody had to even pay for it, with the exception of the monthly Netflix fee. It’s not a truly horrible film, nor is it a pillar of exceptional science fiction filmmaking. It’s just fine. I would argue that it’s the perfect sort of film to get a streaming release as it did because it can be enjoyed at the viewers’ leisure without undue costs.

I really enjoyed my time with this film. It wasn’t the best film I’ve seen, or even the greatest film I’ve seen recently (that award goes to you Shape of Water!), but it certainly wasn’t awful either. There was some good tension among the various crew members with alliances known and unknown that, paired with the quick pace of the film, helped to keep me engaged. The film had a good production design, the special effects were handled efficiently, and we got some deliciously gross body horror involving space worms! Hell, we even got a bit of space espionage to boot. While the film can be a bit predictable at times there was enough positive aspects to the film that they outweighed the negatives for me.

In fact, I personally believe the film gave another layer of intrigue to the Cloverfield series. If you factor in the multiverse theory, I think this film does help to explain more of what happened with the film series. First let’s simplify things with labels. Let’s call the first film in the Cloverfield series Earth 1, the Shepard crew’s Earth as Earth 2, and the Earth that they travel to in Paradox as Earth 3. I’m not sure if the events in “10 Cloverfield Lane” exist on their own separate Earth or if that was just a smaller story taking place on Earth 1 later in the timeline. For now, let’s say it happens on Earth 1 for clarity.  The Shepard’s particle accelerator malfunction at the beginning of Paradox is the inciting incident that triggers a wave of effects throughout the multiverse resulting in untold horrors of monsters and aliens being catapulted across space-time and colliding with various Earths. This is doubly proven when Hamilton crash lands back on her own Earth and a noticeably larger Cloverfield monster bursts through the clouds while her husband Michael screams into his phone “Tell them not to come back! Tell them!” After which I had a hearty laugh and then scrolled around Netflix to see what’s next..