*This film came out in 1962, so obviously, spoilers will be involved in this review*

Written by Mikhail Papava and directed by Andrei Tarkovsky, “Ivan’s Childhood” is an adaption of Vladimir Bogomolov’s 1957 short story “Ivan” which follows an orphaned twelve year old Russian boy that scouts for the Russian Army on the front lines of the German invasion. This is the most straightforward narrative I’ve seen from Tarkovsky as I haphazardly serpentine through his filmography, it’s also one of his shorter films coming in at a brisk hour and thirty-four minutes. From the beginning dream sequence Tarkovsky is already playing with the surreal nature of dreams that would later become a pillar of his stylistic choices in his grander and more iconic films like “Stalker” and “The Mirror”. In it Ivan, ‘the carefree child’ (Nikolai Burlyaev), observes a spiderweb on a tree branch and a butterfly taking flight, after which he too soars through the air laughing, full of wonder. It doesn’t last long however and we’re soon introduced to Ivan ‘the soldier’ in a violent awakening. He’d been camped out in a dark and decaying windmill and soon wades through a murky swamp shrouded by trees and flares in the distance. The title credits begin to roll and the brooding bleak mood of the film sets in. 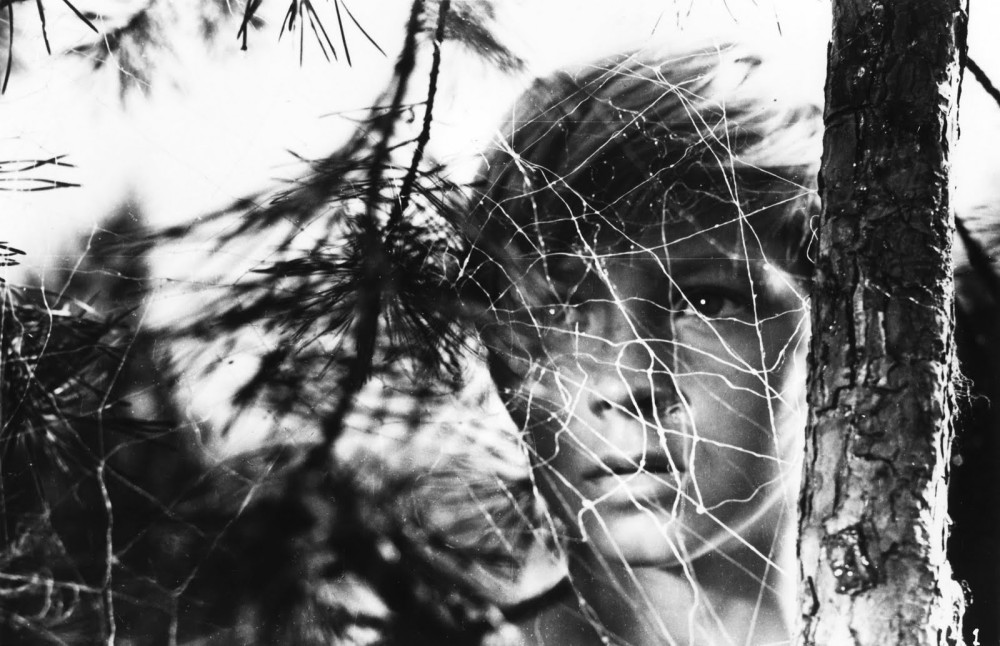 Tarkovsky’s first film steeps us in the director’s philosophy of nature being a respite from the burdens of reality, and his utter despise of war- which is why he pursued the idea of having a war film seen through the eyes of a child, as it was the furthest juxtaposition from war. Ivan makes his way into the Russian military encampment and demands to make contact with high ranking officials. The Lieutenant there, Galtsev (Evgeny Zharikov)- himself a young man no older than twenty-five, makes the call despite his suspicions. Lt. Col. Gryaznov (Nikolai Grinko) answers and corroborates Ivan’s story. The boy had been a scout for their military on an earlier mission across the river and behind enemy lines. From there the film follows Ivan’s determined quest for revenge, refusing to be shipped off to military school or a children’s home, making extra work for the officers taking care of him- though they do genuinely seem to admire the boy. 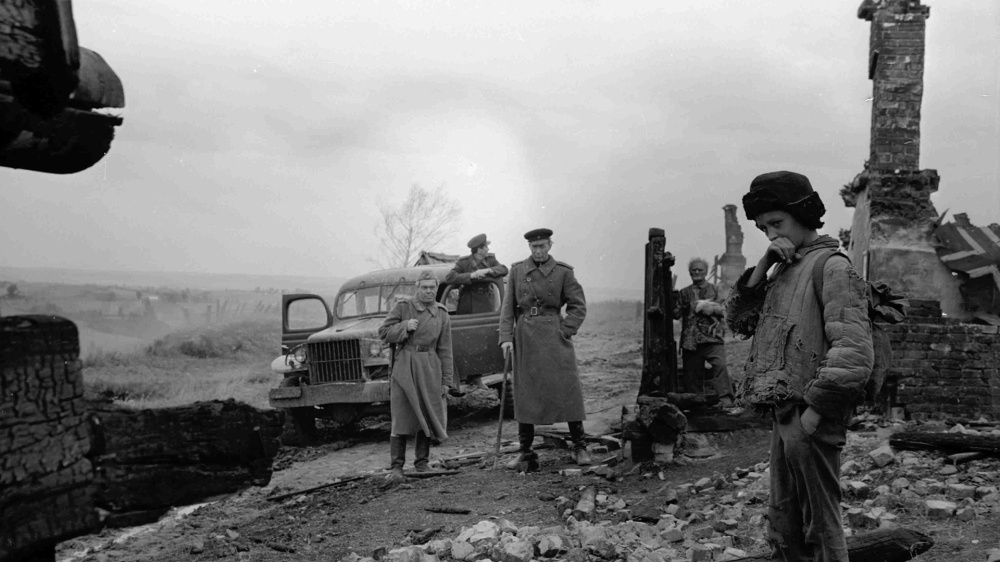 The story also follows a romantic side plot involving a love-triangle of sorts. Galtsev seems to have an unspoken admiration for one of the female military nurses, Masha (Valentina Malyavina). Captain Kholin (Valentin Zubkov) also takes a liking to the quietly defiant field nurse and aggressively pursues her in the birch-wood forest. I was wary of this scene as it was happening, fearing a rape scenario, but luckily it never goes that far. We get the infamous image of Capt. Kholin holding Masha over a trench and kissing her as she reluctantly goes along, but I believe this is simply a case where the scene at hand just hasn’t aged very well, though it doesn’t appear to have malevolent intent as initially assumed. It is, simply put, a product of it’s time. 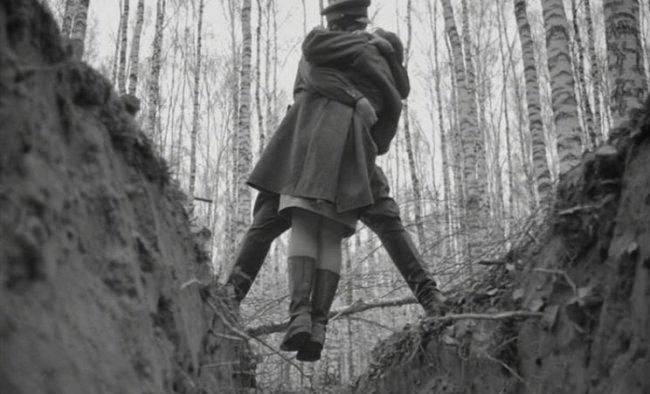 The most fascinating aspects of the film for me though are Ivan’s dream sequences. There are four in the film, the opening scene with the butterfly being the first. The next dream sequence comes after Ivan has met Galtsev, been washed and fed, and finally when he can no longer stay conscious enough to keep up his tough guy bravado he falls into a slumber in which we get a brief look into his core philosophy of being. In it the camera flows freely, which is already a visual indicator that we’re in dream territory as the camera is always poised and precise when Ivan is awake. It floats along to a fire of white birch wood before panning back to a bucket near Ivan’s hand laying off the bed as water drips on it. This provokes the camera to tilt upward as if he were at the bottom of a well. Ivan then reappears with his mother, peering over the edge from above and Ivan’s mother tells him something along the lines of “The brightest stars shine best in the blackest of nights.” Ivan tries to reach into the water’s reflection to grab the star and then, after a cut, lies at the bottom of the well again. We quickly see a bucket fall down towards Ivan as he screams for his mother but before we see the bucket fall into the water we cut again to see his mother’s dead body next to the well being splashed with the water from the bottom of the well. This scene is the epitome of why I am fascinated with Tarkovsky’s films. How he uses space and dream logic is endlessly fascinating to me. Reality becomes distorted and spatial relationships are in a state of confusion. Yet all while we’re getting pertinent character information about Ivan and why he is so motivated get revenge. 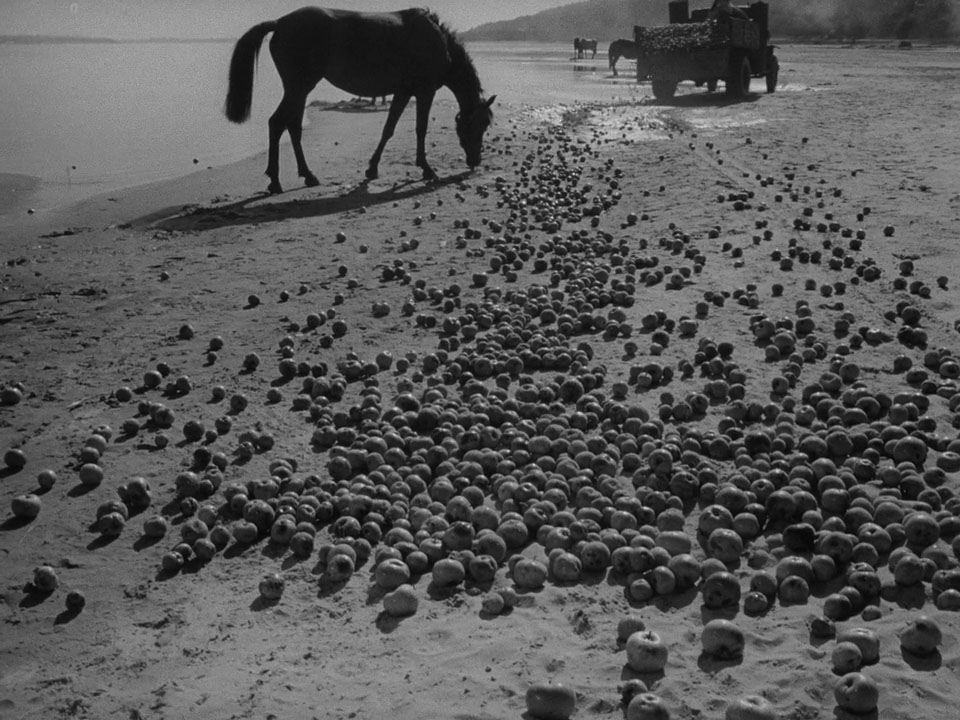 The third scene, which is possibly the most strange, depicts Ivan and his sister riding upon a cart filled with apples in a pouring thunderstorm. Here Ivan smiles, he only does this in his dreams, while being surrounded by an abundance of food and family. We see what feels like a camera pan past his sister’s face three times, but only she is moving from right to left within the frame, and she’s completely dry (even in the rain) the third time she passes by. The dream ends as the cart continues to ride off the path and onto a beach leaving a trail of apples. The camera slows and lets the cart fade away as we focus on wild horses feasting on the spilled fruit in the foreground. The final dream sequence connects all to the three previous ones all while poetically reinforcing the idea that Ivan never had a real childhood during his life, it only existed in his dreams. After the audience learns that Ivan’s final mission scouting across the river with Galtsev and Kohlin ended with his death, the dream sequence gives us an abstract and symbolic send off. I believe this scene begins from Galtsev’s perspective during his frantic retrieval of Ivan’s death documents when raiding a German stronghold in Berlin after the fall of the third Reich months later. After he discovers that Ivan had been captured and hung Galtsev runs to another room where he sees wire nooses hung from railings and the camera begins to spin out of control and we see Ivan’s, presumed, dead body rolling along the floor before a hard cut. From a low angle we see Ivan’s mother smiling down at him and he smiles back, now on the beach from the third dream. He rises, shirtless and drinking from the bucket in the second dream, as his mother picks up the bucket and walking back into the water as she waves goodbye to him. Ivan then goes and plays with other children on the beach, it looks like a game of hide-and-go-seek, and he goes to a lone burnt, dead, tree standing in the sand and counts as the other children leave the frame. Even the tree bookends the film visually from the opening dream sequence. When Ivan returns he only finds his sister, and the remainder of the scene is the two of them running wildly into the shallow waters of the ocean laughing heartily- before a hard cut to black ending the film. 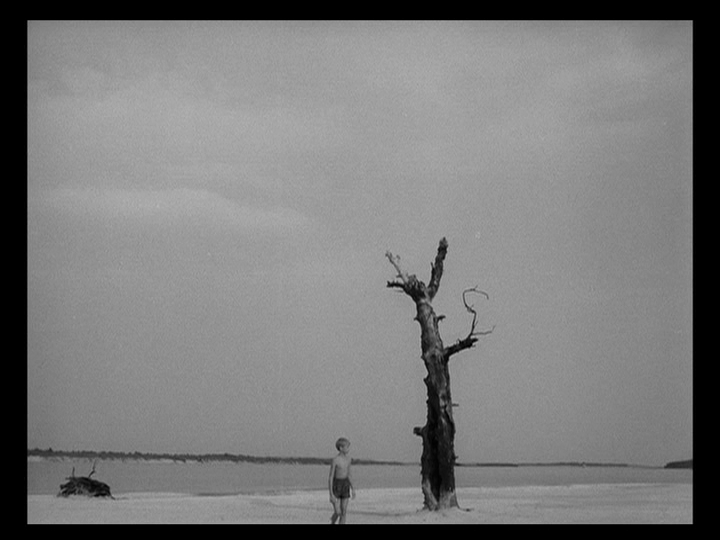 This film was the beginning of Tarkovsky’s film career, and in it you can see the rumblings of a unique cinematic voice forming. While the plot and action of the film are thinner and slower than most, this movie is a good indicator for whether or not you will enjoy the infamous Russian filmmaker’s style. If the abstract sequences turned you off from the story the film was telling, then I must say, you probably won’t enjoy his later works. I approach Tarkovsky’s films with the same mentality that I bring into museums. His films seem to be more akin to seeing visually arresting artwork that plays with the fabric of reality and bends it to whichever way the story feels it should take. It is more about the mood that the images evoke from you than the initial meaning of each scene or the momentum of the story beats.