Written by Derek Connolly and Colin Trevorrow and directed by J.A. Bayona, “Jurassic World; Fallen Kingdom” is the sequel to the 2015 smash hit reboot of the “Jurassic Park” franchise that Steven Spielberg began back in 1993. I saw this film over it’s opening weekend but I’ve been letting the movie brew in my headspace for the last week because it was such a mixed bag. I don’t know if I’ve ever seen a more Frankenstein-like film before to be honest. The direction, visuals, special effects, and suspense of the film were all impressive- but the writing, character choices, and plot of the film were completely off the rails! It felt as if there were two or three very separated and distinct flavors of attitude controlling this bucking beast of a sequel and no one knew how to handle it- with no cooperation across the disparate groups whatsoever. The film didn’t know what kind of story it wanted to tell.

First of all, I feel that you should be warned going into this film- there is nowhere near as much Jeff Goldblum as this movie needs, or to the extent that the marketing implied there might be. If you’ve seen the trailers, that’s essentially his whole performance. However, as welcoming as a Goldblum addition is to any film- this use of the character of Ian Malcolm directly collides with the ideology (and thus the main driving force of the plot) of the main characters Owen (Chris Pratt) and Claire (Bryce Dallas Howard). It’s this exact fulcrum that the film has issues with. Are the dinosaurs of Isla Nublar myth made reality, conjured from wonder and awe? Or are they vicious monsters that mindlessly consume and terrorize? Should the humans save the ill-fated creatures from Isla Nublar’s awakened volcano? Or should we let Nature take it’s course and re-extinct these de-extinct animals? Goldblum’s Malcolm restates his thesis from the first film and of it’s sequel “The Lost World” in which he argues against saving the dinosaurs. After which we cut directly to Claire’s new job running an indie-sized organization to “save the dinosaurs!” A drastic evolution from the first film where the character viewed the lab grown creatures as assets, something from which to gain profit. Here she’s a fully fledged animal rights activist. Quite the leap. We’re then informed of John Hammond’s original financial partner (Who we’ve never heard of until now, the fifth movie) for the first park in Benjamin Lockwood (James Cromwell), who’s in need of a well informed crew to make a last ditch effort to salvage his old friend’s creations. 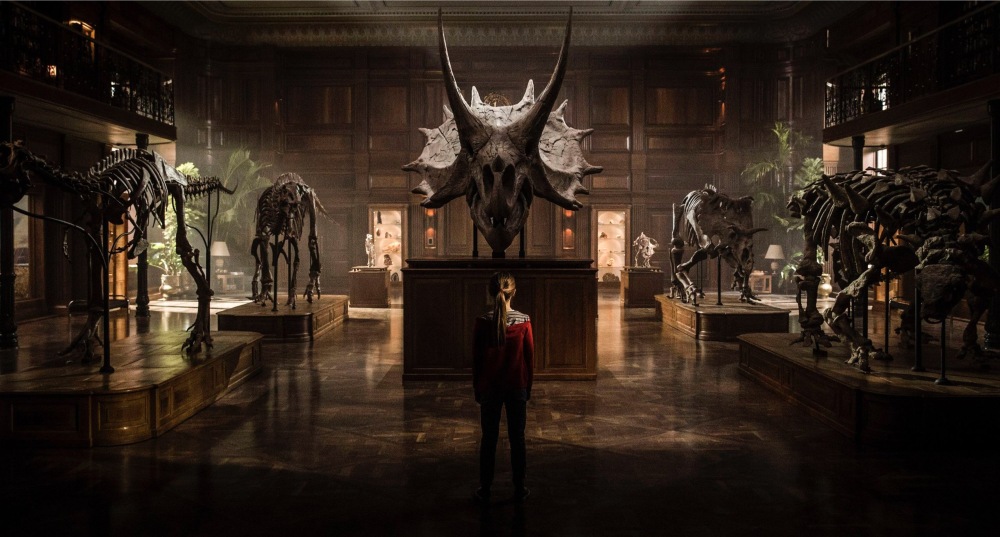 Beyond the philosophical and moral whiplash, the characters make stupid, convenient, and foolish choices throughout the film. Granted, the franchise has been built on the ill-fated decisions of humanity before- but they were never this outlandishly dumb about it. From the military minded Wheatley (Ted Levine AKA Buffalo Bill from “Silence of the lambs”) unclasping the Indo-Raptor cage purely to add another dino tooth to his collection, to the enormously lazy writing choice that the young Maisie (Isabella Sermon) commits to in the final scene- the writing is clunky and unfocused. The script tries to obtain specific outcomes for further franchise building- but in doing so it wastes the opportunities that the current story could have created. There are ways to get the outcome that the ending of “Fallen Kingdom” sets up- but the way they got there was painfully stupid. I won’t spoil the exact ending, but trust me, it’s bad. It’s also a weak excuse to pin the fallout of this film on a young girl when there are so many other ways they could have played it. An immediate easy fix would be to let Mills (Rafe Spall), Lockwood’s assistant with ulterior motives, make that major dooming choice as he’s dying to spite the main characters instead of just using his death as a visual callback to a death in “The Lost World”.

That’s not to say that the film doesn’t have some value to it. The imagery and direction, along with the mood, sense of suspense, and entertaining set-pieces all combine to smooth out the film and lessen the extent of mistakes that engulfed the rest of the story. The way Bayona uses scale, lighting, and framing all collectively raise the content above the level of quality expected with these movies by now (excluding the original- obviously). In fact the second half of the film taking place inside a giant mansion was a fun diversion and there were some good ideas that they could have expanded on. An illegal dinosaur auction has its merits in theory, but the film took a cartoonish mind of villainy at this point. One shot even has Mills face being lit up by a computer screen as counters and bars load while numbers skyrocket- a necessary shot to remember that the villains are greedy and evil. There was a few good half baked ideas in this script, and it might have turned out great eventually, but there just wasn’t enough to get a score better than “Passable” from me honestly. I was entertained with this film, but the more I think about it, the less I appreciate it retroactively.