(As this film is more than thirty-five years old, there will be spoilers. You have been warned)

Written and directed by Andrei Tarkovsky with screenwriting cowriters Arkady and Boris Strugatsky, who also wrote the novella “Roadside Picnic” on which the film is based upon, “Stalker” is the final film that Tarkovsky made under the banner of the Soviet Union. It’s quite the meditative quest with dashes of science fiction amid the philosophical and theological musings that the three main characters debate about throughout their journey. In this indiscernible future of a post apocalyptic scenario there lives a Stalker (Aleksandr Kaydanovskiy), the main characters of the film are known only to us through their occupations, a man that specializes in the freelance guiding of various clientele into the mysterious and dangerous “Zone”. The Zone is an uninhabitable area near the cityscape that the remainders of humanity avoid, the heavily armed military guards the entrances to the Zone and stalkers must navigate past them in secret to gain access to the untouched land. Although nobody seems to know the truth of its origin, the urban myth surrounding the Zone cites a meteor that crash landed near there causing chaos decades earlier. Curiously the military sent in brigades of soldiers and armament to investigate the situation and were never heard from again. Hence the containment of the dangerous area. This time around the Stalker plans to transport two men, The Professor (Nikolay Grinko) and The Writer (Anatoliy Solonitsyn) into the Zone.

So, you might ask, “Why would people want to go to the Zone if it’s so notoriously dangerous?” Well, word has it that within the Zone there lies a structure forgotten to the world, decaying and deteriorated, yet within that old building lies a specific room that supposedly grants the deepest desires of all who dare to enter. The Professor wants to win the Nobel prize while the Writer has lost his inspiration and wants to rid himself of his writer’s block.

As the journey goes along, and it is a journey- a slow one at that, the film is full of incredibly long takes and shots of the three characters traversing the dangerous cityscapes, the railroads leading out of town, and the vast and green wilderness of the Zone. Anyways, as they travel about the Writer and the Professor wax poetic and casually lob sardonic insults at each other and their proposed fields of work while the Stalker constantly checks the landscape for danger. Much of the film inserts a mysterious tension brilliantly played on by Tarkovsky by alluding to the Zone as a nonlinear force, traps can ensnare unknowing people that traverse blindly into the tall grass, and the Stalker talks of the Zone as something that is in constant flux. Traps that used to exist are now safe paths while other routes that had been impassable before become the only ways through. He evens goes so far as to say that people bring these changes with them as they enter, its not that the Zone is actually changing at all, but that it is shaped by the intentions and thought patterns of those who enter it.

At nearly three hours, this is a beast of a film to get through if you’re an impatient viewer. There are no real actions sequences here friend, this is a different sort of film where a calm imagination and an adoration for dreamy visuals will do you some good. It’s also notorious for it’s incredibly long takes, “The film contains 142 shots in 163 minutes, with an average shot length of more than one minute and many shots lasting for more than four minutes.” While there are definite allusions to theological yearnings, I feel that this is a film where, much like the Zone itself, you bring most reflections of who you are to your understanding of the film and it’s story. I can understand where someone might see that the Stalker’s pains at the end of the film could be an expression of Tarkovsky’s feelings on a world without religion and hope, without people that believe in something greater than themselves. Though for myself it felt more along the lines of an allegory for the allure and humility of mystery versus the arrogance of believing that you know how the world works and that there are no such mysteries left to be discovered. There is some overlap in the ideas in a macro sense, but that’s just what I felt from my viewing of the film. 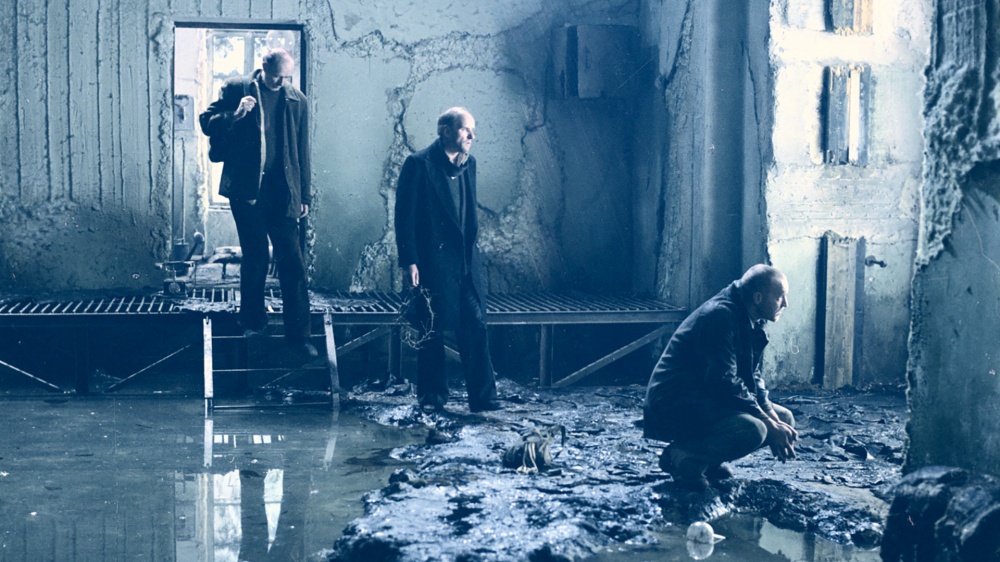 The production of the film sounds like a disaster three times over if you know the details. Tarkovsky shot the entirety of the film on three separate occasions. The first failure was due to a Russian film studio not properly converting the film’s stock as Tarkovsky used a brand and type of film that they weren’t fluent in. I believe the second effort was mostly due to shooting location concerns and the hurdles of laws under the pressure from the Soviet Union’s specific requirements of art during that time. Over the course of the production they shot an alarming amount of footage, “..consuming over 5,000 metres (16,000 ft) of film.” There’s also the fact that this was the last film Tarkovsky made before leaving the Soviet Union, and through the main character of the Stalker we can see Tarkovsky’s torment over the notion of wanting to leave. To create, and live, more freely, or to stay with what he knows. Stalker even says that back home in the sepia tones of the city (versus the color footage of the Zone), he feels as though he is incarcerated throughout his everyday life. “Almost all the dreams recorded by Tarkovsky in the period 1974–77 seem to have been about being in prison—in one case, being in prison, escaping, and wanting to get back into jail again:

‘At last, to my joy, I saw the entrance to the prison, which I recognized by the bas-relief emblem of the USSR. I was worried about how I was going to be received, but that was as nothing compared with the horror of being out of prison’ .”

Getting even more meta about the topics in play, in the film the Writer and the Professor never even enter the room once they finally reach it, for the Stalker has warned of what happened to his former mentor, another stalker nicknamed Porcupine. Our main stalker tells us that while stalkers are forbidden from entering the room, Porcupine eventually did so after the death of his brother. He went and asked to reverse his brother’s death- but the room saw through to his subconscious desire to be wealthy and instead granted him wealth beyond reason. Porcupine hanged himself a week after this. Another analysis dives into this theory of deeper hidden desires within Tarkovsky about wanting to leave Russia. “Stalker at some level (pos­sibly even at the level of “deepest desire”) is about the wish to leave Russia for good: the first twenty min­utes enact a very recognizable Cold War fantasy of breaking through bar­riers. At the same time, there is the corresponding feeling that it would be impossible, and actually wrong, to do this. Thus, all the time that Tarkovsky was fretting against the “unbearable restraints” of the socialist bureaucracy he was fated to serve (and thinking that, perhaps, there might be a way out—for example, by accepting the invitation to come to Italy that had been sent by his friend Tonino Guerra), he was also “digging in,” preparing to stay.”

Allegories and musings aside, this is a very beautiful film to watch. If you are a viewer more inclined towards the visual arts over dialogue and actions in your storytelling, then this film may have something for you. Since my viewing of another Tarkovsky film in “The Mirror”, I’ve come to notice that the Russian filmmaker has a unique tendency to fill the screen with the natural world with a specifically unique voice. You might get the feeling that Tarkovsky himself was more at home in the forests and fields of Estonia rather than the bustling streets of Moscow. Though, he may have unintentionally sealed his, and other crew members’, fate while shooting on location for this film; “Several people involved in the film production, including Tarkovsky, died from causes that some crew members attributed to the film’s long shooting schedule in toxic locations. Sound designer Vladimir Sharun recalled:

‘We were shooting near Tallinn in the area around the small river Jägala with a half-functioning hydroelectric station. Up the river was a chemical plant and it poured out poisonous liquids downstream. There is even this shot in Stalker: snow falling in the summer and white foam floating down the river. In fact it was some horrible poison. Many women in our crew got allergic reactions on their faces. Tarkovsky died from cancer of the right bronchial tube. And Tolya Solonitsyn too. That it was all connected to the location shooting for Stalker became clear to me when Larisa Tarkovskaya died from the same illness in Paris‘ .”

This definitely falls more on the art-house side of cinema, but I think it’s good to constantly challenge your palate when it comes to the films you watch. How would you ever know whether or not you would enjoy a film such as this if you never give it the opportunity to challenge your assumptions? Stride towards a greater variety of art in every direction, besides, its more fun that way!

(sources) The quotes I have inserted into this review came from these three articles on the film and I found them to be quite interesting, click the links and give them a look!: