Spoilers will be included in this review. You have been warned.

Written by Ryûzô Kikushima and Akira Kurosawa and directed by Kurosawa, “Yojimbo” is a Japanese Samurai film, set during the 1860’s, in which a lone Ronin (Toshiro Mifune) happens upon a small town that happens to be besieged by two warring clans with a blood feud. The Samurai then decides to play them against each other to free the town, and possibly make some money while doing so. As the opening credits scrawl by, our Ronin walks into frame as he wanders the countryside. He tosses a stick in the air when faced with a cross in the road, letting fate decide his path. He soon stumbles across a small farm in which he overhears an argument amongst a family. The son doesn’t want to work the hard but simple life of a silk farmer as his father before him and instead decides to join a gang as a hired warrior in a nearby town. The Samurai lets curiosity lead him and soon he’s sitting in a small tavern in that town ran by Gonji (Eijirō Tōno). The cantankerous old man lays out the situation for him and tells him he’s better off leaving town before everyone kills each other.

Gonji reveals that Ushitora (Kyū Sazanka) and Seibei (Seizaburo Kawazu) are the heads of the two warring clans, though Ushitora used to be Seibei’s second in command until Seibei claimed that he’d eventually cede his land and power to his son Yoichiro (Hiroshi Tachikawa), a notoriously useless individual. Thus Ushitora broke away from Seibei and formed his own clan challenging the power structure of the town. Each patriarchal figure had made claims to power in the village, Seibei had the local silk merchant and mayor Tazaemon (Kamatari Fujiwara) in his pocket while Ushitora sought the local sake brewer, Tokuemon (Takashi Shimura), proclaiming him the new mayor instead. After listening to the current state of affairs in the town the Samurai decides that the whole town would be better off with both clans eradicated and begins to craft sly machinations between the two. 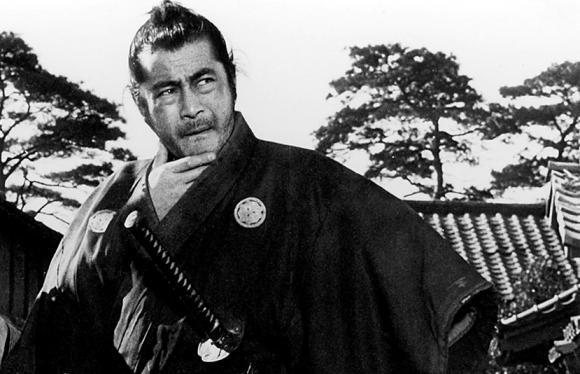 The Samurai then proves his violent worth by making a spectacle in the middle of town by killing three of Ushitora’s men and then aligning himself with Seibei. Seibei then decides that with the new Samurai on his side he must defeat Ushitora and his hired men that very day. When asked his name the Ronin happens to be looking out an open door and responds with Kuwabatake Sanjuro, the first name meaning Mulberry field (The same type of field he was looking at), and the surname being a wry definition of the thirtieth son, but he implies that it’s closer to a meaning of his age-though he admits he’s “..actually closer to forty”. After they agree on a price for his help in the coming battle Seibei goes to discuss logistics with his wife Orin (Isuzu Yamada), which Sanjuro secretly listens in on. Orin devises a plan to simply kill the Samurai once the fight is over so they don’t have to pay his high costs. 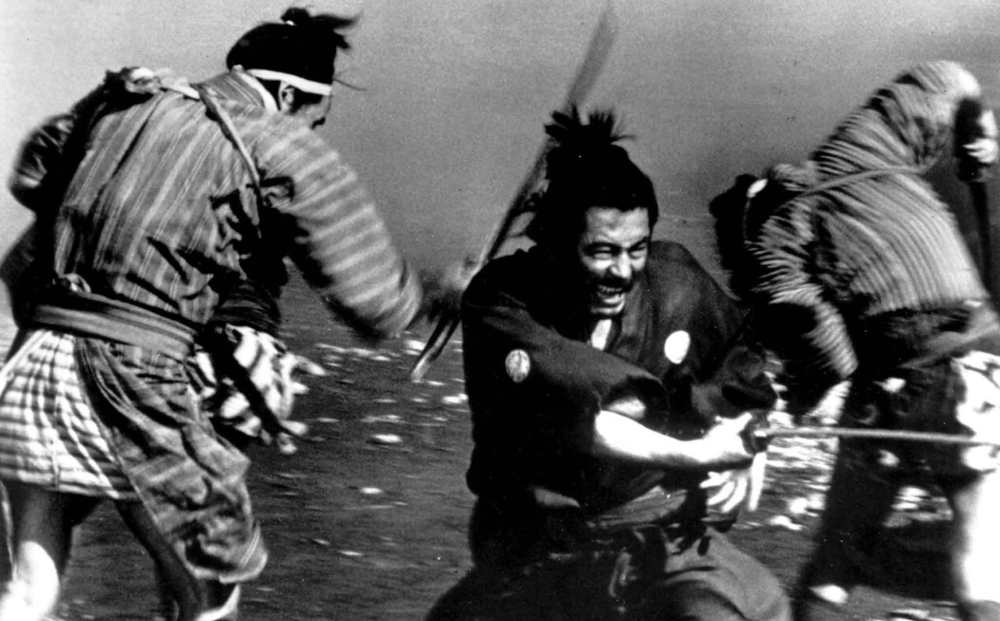 As both clans appear on the opposing sides of town, rabid and eager to end their feud in a bloodbath, Sanjuro walks across to Ushitora and announces that Seibei has offended him and that he declines the fight. Sanjuro then climbs the ramshackle tower in town to watch the two clans fight to the death with a gleeful smirk. Though before anyone can get the nerve to kill, a scout on a horse reels into town to warn that a government official is on his way to inspect the town and it’s wares of silk and sake. To the disappointment of Sanjuro everybody drops their swords and quickly rush to make the town appear as if everything is normal. The government official stays a grueling ten days until another government official is murdered a few towns away, forcing an early departure from the corrupted elite. 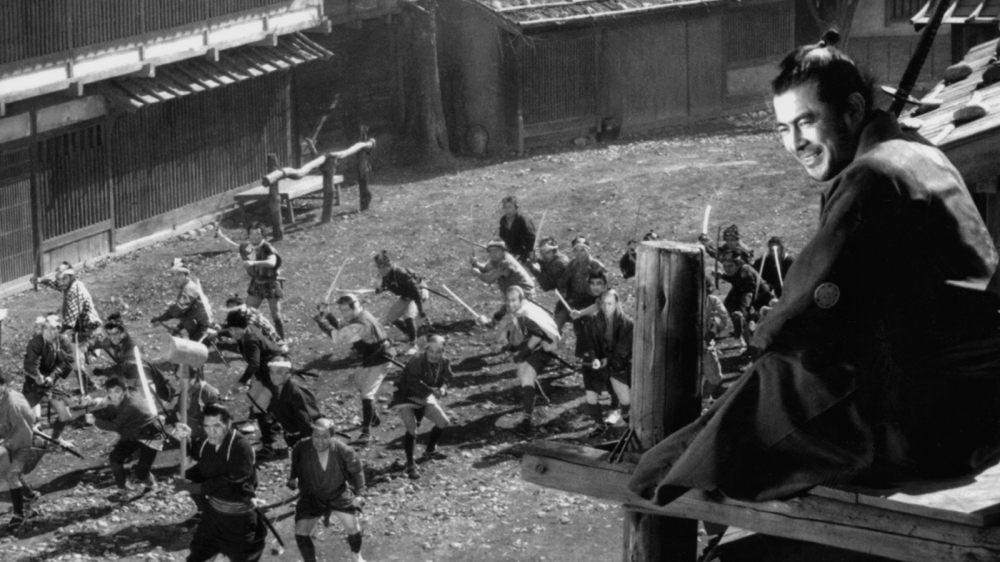 Sanjuro overhears two drunken assassins talking too much at Gonji’s tavern shortly after this, revealing that it was Ushitora who hired them to commit the other official’s murder. Armed with this knowledge Sanjuro captures the killers and delivers them to Seibei for a price, after which he heads to Ushitora and tells him that it was Seibei’s men who captured the two. Ushitora, shocked by this reveal, pays off Sanjuro for the information and then orders the kidnapping of Seibei’s son Yoichiro. Things get out of hand quickly after this as Ushitora makes an offer for Seibei to retrieve his son in exchange for his two murderers, but instead he double-crosses Seibei by shooting the two killers before Seibei can reclaim his son. Seibei had expected this double-cross however and had preemptively kidnapped Ushitora’s claimed mayor Tokuemon’s prized prostitute, Nui (Yoko Tsukasa). Sanjuro later finds out that Nui isn’t truly a prostitute but a bargaining chip as her husband Kohei (Yoshio Tsuchiya) had owed a gambling debt to Tokuemon and couldn’t pay off his debts, so Tokuemon took Nui instead.

Sanjuro ponders this and eventually tricks Ushitora into revealing where Nui is kept and investigates with Ushitora’s younger, and far dumber, brother Inokichi (Daisuke Katō). Sanjuro quickly kills the guards, while distracting Inokichi, and then sends Nui, Kohei, and their child away into the night with the gold he received from both clans. He shows Inokichi the dead guards and sends him back to Ushitora to warn him of the attack and that Nui must have escaped or been captured back by Seibei’s men. This results in a fast escalation of violence and sabotage in the town. First Tazaemon’s silk stock is set ablaze, then Tokuemon’s sake barrels are destroyed as the town’s financial industry becomes ruined and unprofitable.

Eventually Ushitora’s youngest brother Unosuke (Tatsuya Nakadai), the only gun toting gangster among the bunch, becomes suspicious of Sanjuro’s role in all of this and discovers evidence of his double-cross against Ushitora and beats Sanjuro without his sword. Jailed and bloodied, Sanjuro outwits Ushitora’s guards and crawls to Gonji for help. Gonji enlists the casket maker’s (Atsushi Watanabe) help in transporting Sanjuro out of town to heal in a small shrine in the cemetery, but before they leave they stop to witness Ushitora’s final attack against Seibei as they slaughter the opposing clan in entirety. As he recuperates Sanjuro practices throwing knives, but is pulled back into town when he hears that Gonji, who had been delivering food and ointments to Sanjuro, has been captured by Ushitora and his men. The final showdown is very reminiscent of the classic western trope of a showdown through the street on opposing sides as Sanjuro precisely and efficiently kills Ushitora and his remaining forces, he even bests Unosuke and his pistol, with his throwing knife. The final moment is given to Tazaemon though, who appears from the rubble beating a prayer drum, seeking his prey. Finally he finds Tokuemon and kills him, thereby ending the blood feud and violence. Happy with this conclusion, Sanjuro exits the town to the beginning of the credits roll. 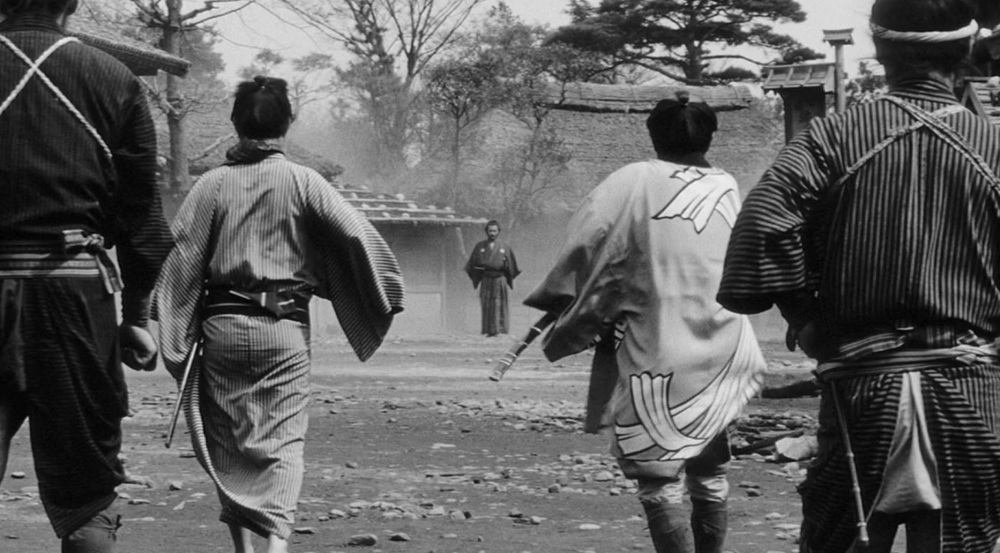 This was a great Samurai film from Akira Kurosawa. There was a lot to love with this film. The framing, cinematography, the performances and action, everything was a tightly knit piece of genre entertainment and I genuinely loved it. I started with this Samurai film after finding out that Sergio Leone’s first film in his infamous “dollar trilogy” A Fistful of Dollars (starring Clint Eastwood) was a remake of this film. You can definitely see the love of this film in Leone’s remake, and I really enjoyed recognizing how that transition was made between the two. If you’re looking for a classic Samurai film from one of the best filmmakers of the twentieth century, you can’t find much better than this!