Written by Bryan Woods, Scott Beck, and John Krasinski and directed by Krasinski, “A Quiet Place” is an intelligent and intimate thriller that expertly showcases Krasinski’s skill behind the camera as well as in front of it. This is Krasinski’s third time in the director’s chair when it comes to features, his first two, “Brief Interviews with Hideous Men” and “The Hollars” were both comedies with drama sprinkled in, though he also directed a few episodes of The Office. None of which suggest the talent and brilliance laying dormant within Krasinski for his third time at bat in “A Quiet Place”. I didn’t know what I was about to witness after buying my tickets to this particular showing, I had a night off from work so I looked at the showings and randomly happened upon the monster movie- some word of mouth around the internet from critics I trust seemed to suggest it would be a good time at the theater, and they weren’t wrong in the slightest. In the opening scene we’re introduced to the family Abbott in an abandoned grocery store. The parents (Krasinski and Emily Blunt) and three children all seem tense, barely making a sound as they carefully scatter about on the balls of their feet looking for supplies. They use sign language to communicate between others and through some clever use of sound editing we notice that one of the children (Millicent Simmonds) must be deaf. As they leave the store newspapers flutter in the wind as you can see the headlines read in bold letters, “IT’S SOUND!” consuming the page. I won’t divulge into details that one might consider spoiler territory, but it’s quickly established that any noise above a muted whisper is met with brutal violence from the monsters lurking just beyond sight.

This film is a masterclass in efficiently showing you everything you need to know about every member of the family and how they all interact with each other through this world changing scenario. Since there is almost no spoken dialogue in the film and few signed lines, we’re inclined to study each character’s face and body movements more than a film might normally require of its audience. The film’s world and sense of danger are exquisitely portrayed in the first half of the movie. We’re introduced to the threat outside and how very real it is, we see how they survive through careful planning and awareness of their surroundings, and we see them trying to live a normal life amidst this ever present terror. At the beginning of being seated in my theater, I was worried that the crowd might be too noisy for this film. The audience was laughing and chatting, eating and coughing all throughout the trailers- but as soon as the opening scene captured everyone’s attention with rapt bated breath, I knew I was in for a treat. This is a film where precise sound design is key, it was utilized with such perfection in order to ratchet up the suspense as much as possible at any given moment that it seemed almost cruel in it’s execution, it was almost too good!

What I loved most about the film was that, much like “Jaws”, the focus wasn’t on the unseen threat awaiting our characters, it was on the people at risk themselves. The monsters, or aliens, or whatever they were (it’s really unimportant as to what exactly they are) weren’t overused, though they do show themselves eventually, the simple fact that they were nearby created an unsettling atmosphere that was prevalent throughout the film’s runtime. The second half of the film is almost entirely steeped in suspense. Krasinski pulls from masters like Hitchcock here in that once things start to go off the rails for the family Abbott- there’s always another problem that exponentially increases anxiety and tension. He never lets the audience go once he’s got you, splitting up the various family members for one reason or another comes with a lot of variables and everything that can go wrong does! 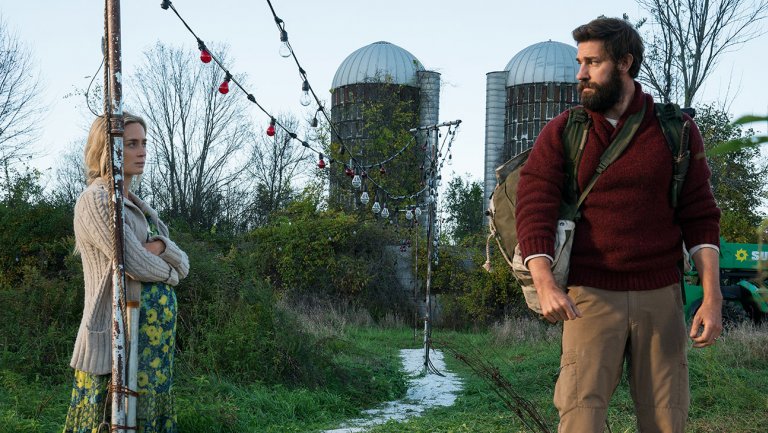 After this film, I know I’ll be paying attention to whatever projects Krasinski’s working on, because this shows great potential. “A Quiet Place” is a classic thriller that’s incredibly clever on several fronts and I imagine it will be a favorite among audiences from here on out! This film may be the evolution of a master at work, only time will tell!