Written by Aaron Stewart-Ahn and Panos Cosmatos, and directed by Cosmatos, “Mandy” is a revenge movie drenched in cosmic horror. Starring in the lead is well documented cinematic mad man Nicolas Cage as Red Miller, a simple logger and heavy metal admirer living deep in the forested Shadow Mountains in 1983 with his fantasy artist lover Mandy (Andrea Riseborough). Together they lead a quiet, small, life in their cabin watching late night movies or burying their noses in pulpy fantasy paperbacks. Thus it isn’t long before a chaotic evil enters their lives, perhaps sensing the coming doom Red articulates this aloud one night mumbling, “Sometimes I wonder if we should leave this place..”

Enter the Children of the new Dawn. Led by the fanatically deranged Jeremiah Sand (Linus Roache), the hippy zealots happen to pass Mandy on her walk to work one day and after Jeremiah eyes her, he decides that she’s his. He gives several monologues that are typical of a cult leader, because he is “special”– only Jeremiah can be the conduit between man and gods, who have told him that everything on the earthly plane belongs to him for his servitude. So, he sends out a few followers to summon demons, or inter-dimensional cenobites (or whatever you’d like to call them), riding black motorcycles, adorned in costumes with leather spikes, and leaking some disgusting fluid. After the metal bikers from another dimension arrive, Jeremiah and his zealots overpower Red and Mandy in a home invasion. Jeremiah’s followers heavily drug Mandy and bring her to Jeremiah where upon hearing his musings and master plan, she denies him with cackling laughter. A few scenes later after some intense motivation building for Red, he’s finally given the reigns of the story and we follow him on his journey of vengeance into madness.

The rest of the film is fairly straightforward from this point on, with things getting progressively stranger the closer Red gets to exacting his revenge on Jeremiah. So this film, I have to say, probably has the most unique vision I’ve seen all year (Admittedly I haven’t seen some summer flicks like “Sorry to Bother you” and “Black Klansman” yet). This is the first film I’ve seen from Panos Cosmatos, but his directorial style reminded me most of a Heavy Metal and Fantasy spin on David Lynch’s slow moving and painterly methodology. This film is far more art-house than the marketing indicates, and thus those seeking an action filled thriller could be greatly disappointed. This is a film that demands your patience, and it isn’t necessarily going to hold your hand through the bog of heavy metal insanity. Those willing to grant the film a watch will get some of the ridiculously violent tone that the trailers and marketing hinted at, just at a much slower pace, and far less of it than may be expected. This is a slow, brooding, film that doesn’t sacrifice vision for marketability- which is admirable in today’s world of cinema. 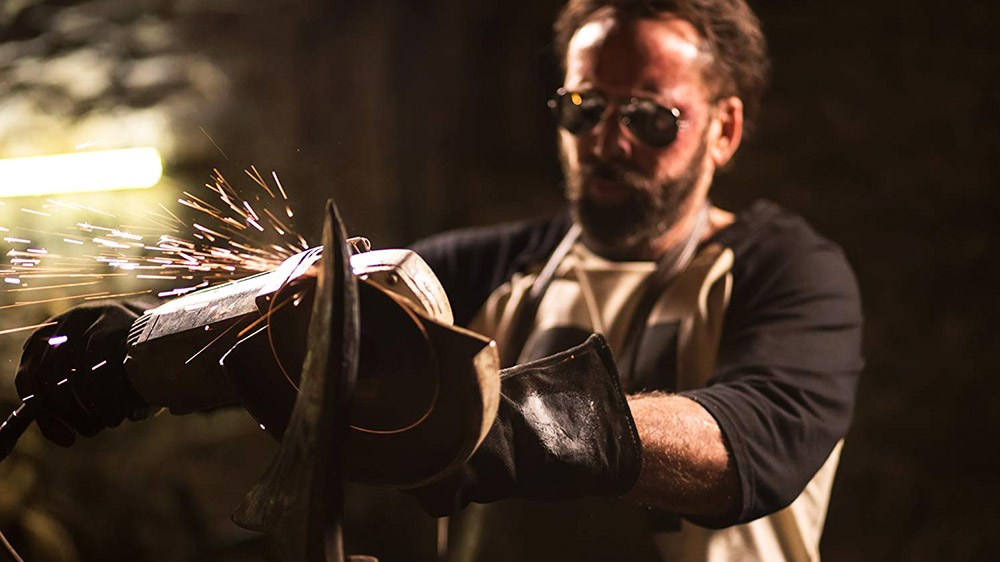 I think the two most salient aspects of the film are the color palette and the score, or at least those are the two most overwhelming senses. After all, what is film but light and sound? The film is awash in bellowing reds, deep shimmering blues, and flashes of brilliant greens. The score itself is a major aspect of the mood of the film. The near constant grumble of heavy chords echo Red’s boiling rage and primal instincts as his quest for vengeance evolves throughout the story. This film is as close as you could get to walking into a Heavy Metal album cover art and milling around the disparate wastelands and otherworldly landscapes. There may be hundreds of revenge flicks out there, but I assure you- there are none quite like “Mandy”.